How to use the tools on FPL Form for optimizing your Fantasy Premier League team.

FPL Form is a website designed to help you choose which players to transfer in and out of your Fantasy Premier League (FPL) team, when to transfer them, and which players to play in your team, captain, or sit on your bench. Past statistics are used in optimized algorithms to predict future performance. The ultimate aim is to maximize your FPL points so you can win your mini-leagues and achieve a high overall rank. 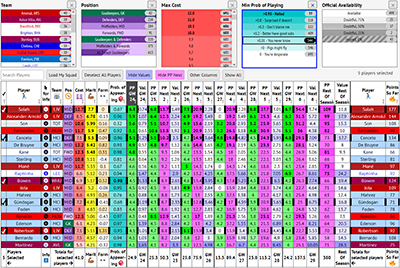 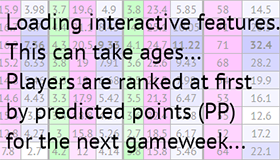 The FPL Player Predicted Points (PP) and Value page is an interactive table that shows predicted points (PP) for each player for up to the next 6 gameweeks and the rest of the season, along with various other information.

If things go weird at any point, reload the page. If things are still weird then hold the CTRL key (CMD on a Mac) and press F5 to do a hard reset, which refreshes the cache. See below for instructions on clearing the cache on mobile.

When scrolling the table vertically, the column headers and footers should "stick" to the top and bottom of the screen and always be visible.

To sort by multiple columns, click a column header to sort by its values, then hold the SHIFT key while clicking further column headers to sort secondarily by the values in those columns. For example, you could sort by Cost, then hold down the SHIFT key and click PP Rest Of Season to order the players by their predicted points for the rest of the season, within each price point. Or you could rank each team's players by position and predicted points for the next 6 gameweeks by clicking the Team column header, then hold SHIFT and click Pos then PP Next 6. Click any other column header to clear the multiple column sorting.

Alternatively, if you click a column to sort by its values without holding SHIFT, the secondary sorting will be by the column previously sorted by. It's really useful that the "existing" sorting is not forgotten. For example, you might click PP Next 3 to sort by predicted points for the next 3 gameweeks, then click the ✔ at the top of the first column to sort by selected players (see Selecting Players). This quickly ranks your own players (and any you have manually selected) at the top of the table.

Columns can be reordered by dragging the column header left or right. Useful for small displays, or where you're only concerned about a couple of columns. For example you might drag PP Rest Of Season column all the way to the left, before the individual gameweek PP columns.

Click the Show All button to show all columns.

Note that, currently, all columns will be visible and in the original order again if you refresh the page.

Many of the column headers in the table show tooltips when you hover over them, as seen in this screenshot.

Below is a summary of each column.

The players shown in the table can be filtered by various categories using the filters panel at the top of the page, to limit the players shown to only the ones that interest you. Filters can be selected from more than one category.

The number of active (currently selected) filters is shown at the top left of the page.

The number shown in the elliptical box next to the filter description is the number of players that satisfy that individual filter.

Specific players can be found by using the search box on the left of the page. Only rows containing text that matches what you type will be shown.

You can select players to view predictions for a group of players, or just to highlight them.

To deselect a player, click any cell in the player's row again (except for the cell). To deselect all players, click the Deselect All Players button above the table.

The total cost and total predicted points of the selected players are shown in the table footer.

The number of selected players is shown at the bottom of the first column, and also above the table at the right. Your squad should have 15 players (2 goalkeepers, 5 defenders, 5 midfielders, 3 forwards).

Selected players can be shown together at the top of the table by sorting by the first column (by clicking the ✔ in the column header). You should use this a lot! 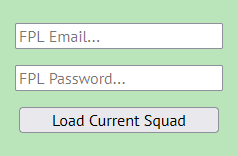 We do not store your email address or password, and we never attempt to make transfers or play chips for you. Your browser may store your email address or password locally on your device, if you permit it. Your squad is "remembered" across pages (stored in your browser) until you close your browser, or another manager's squad is loaded, or you choose "Forget FPL Squad" from the main menu.

To help you decide which of your players to captain, which to play, and which to bench:

To compare future points predictions for 2 alternative sets of players:

First gameweek to consider - Here you choose the first gameweek to include in the calculations. This defaults to the next gameweek, but you can choose a future gameweek if you wish to plan ahead.

Cash to leave in the bank - Here you set how much cash you wish to leave in the bank after your transfer(s). It defaults to 0. You may wish to set a higher number to keep some cash in reserve, but that may hide some potentially very attractive transfer suggestions. Personally I never set this above 0 so I can see more options.

Exclude replacements below this probability of appearing in the next fixture - Here you can choose to only suggest players above a certain probability of playing (between 0 and 1) in the next fixture. This may be useful if you are only looking for players who are likely to start, but note that if you increase the figure from 0, you may exclude cheap enablers. e.g. In a double transfer, Holding may only have a 0.5 probability of playing, but at just 4.3 million he can sit on the bench and may free up just enough funds to enable you to sign Salah.

Players To Keep - Here you can select players to exclude from the transfer suggestions (and therefore keep). By default, all your current substitutes except your 1st outfield subtitute are selected. If you deselect everyone, expect your substitutes to dominate your top suggestions. Please let me know if you think I should change this to pre-select no players, or perhaps just your 2nd goalkeeper.

The table shows the top 3 affordable players (that you don't own) to replace each of the players in your squad.

The table shows up to the top 3 affordable pairs of players (that you don't own) to replace every pair of players in your squad.

Players to sell are on the left. Players to buy to replace them with are on the right. The most profitable transfers, in terms of predicted FPL points, are shown at the top. Here are descriptions of the less obvious columns: 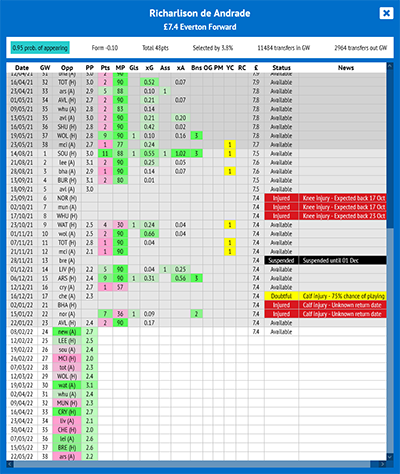 Click the symbol for a player in either the FPL Player Predicted Points (PP) and Value page or my transfer suggestors to launch a big popup window containing detailed information about that player.

If the player is flagged for any reason, this will be displayed in a banner at the top of the popup window. Below that, the top info panel displays the following information:

The table of gameweeks makes it easy to analyse a player's statistics, fixture difficulty and points predictions at a glance. Future gameweeks are  white  . This season's gameweeks whose transfer deadline has passed are  pale grey  . Last season's gameweeks, if any, are  darker grey .

In general, pink is bad, green is good, and grey is neutral.

The meaning of most of the table's columns are shown in tooltips when you hover over their headers. Here's a list of the meanings of the columns:

The site has 5 more season tickers to help you with planning your FPL transfers and team selections.

Cells are shaded dark grey in these circumstances: 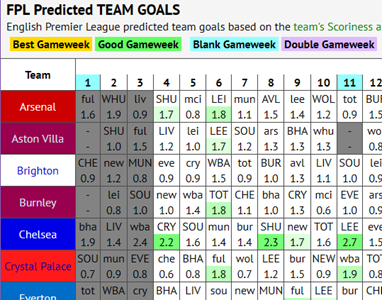 This table show predicted team goals for each gameweek based on the team's Scoriness and opposition's Porosity metrics.

It is particularly useful for spotting opportunities to play your triple captain chip. The deeper green, the more goals the team is predicted to score. The predicted highest scoring fixtures are colored  gold , and are either in double gameweeks or when the scoriest teams meet the leakiest opposition. Of course, outstanding team performance does not necessarily translate to a monster haul for any individual player, and you'd still want to consult the predicted FPL points table, but this table gives an at-a-glance overview of which teams and gameweeks to target. 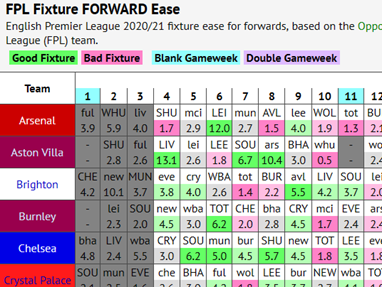 These 4 tables show the ease of future fixtures by FPL player position, to help you with transfer strategy:

The fixture ease is calculated on the basis of an optimized mix of these metrics (that you can see in my FPL Team Metrics table):

Some of the ratings can be quite surprising, and in conflict with general conceptions about teams' strengths, but my optimization has shown this metric to be generally a slightly more reliable predictor of future FPL points than goals scored/conceded or team xG/xGA. 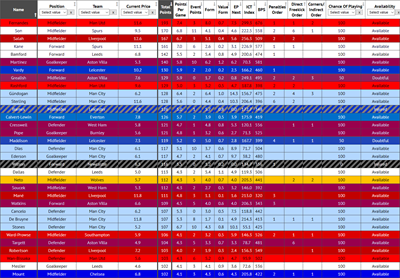 This is simply a table of player data taken from the Fantasy Premier League API.

By default, the table is sorted primarily by Total Points this season, and secondarily by the player's name. To sort by other columns, click the column header once or twice.

By its "big tables" nature, most of the FPL Form website is easier to use on a desktop computer or other device with a large display. It is possible to use on mobile devices, but it is not easy. It helps if you are already familiar with how the site works on a larger display. Below are a couple of tips to help you.

Chrome on Android has a feature that enables zooming on all sites by default, for accessibility purposes, regardless of the site's setting. Unfortunately this breaks the functionality of our pages that feature interactive tables, such as FPL Player Predicted Points (PP) and Value and our FPL Manager Ranking, for which zooming must be disabled on mobile devices. To disable zooming:

If things go weird (e.g. a page hangs during load) it can help to clear the browser cache and reload the site. Unfortunately it is a bit more difficult than doing CTRL+F5 on desktop, and I could not find a method to clear the cache for just one site. I only tested on Chrome and Firefox for Android, but these settings may also apply to the same browsers on other operating systems.